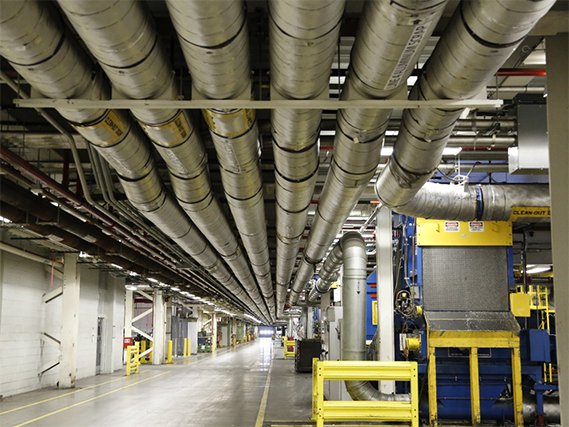 ONE CHIP AT A TIME: HOW ONE ENGINEER'S INNOVATION HAS FORD NOW RECYCLING 20 MILLION POUNDS OF ALUMINUM A MONTH

DEARBORN, Mich., April 21, 2017 – Americans are quite good at recycling things found around their homes. In a typical week, according to the EPA, items like lead-acid batteries, cardboard boxes, soup cans and newspapers might constitute a 10-pound load in their municipal recycling bins. But Chip Conrad, a Ford stamping engineer, takes on a bit of a heavier load – recycling 5 million pounds a week of high-strength military-grade aluminum scrap.

Conrad led the design of an expansive closed-loop recycling system that enables the company to reduce waste, save energy and improve sustainability. Now in use at three Ford factories, two of which build F-Series, America’s best-selling pickup for 40 consecutive years, the system is producing savings that are nothing short of monumental. Ford is now saving enough recycled high-strength military-grade aluminum alloy to build either 51 commercial jetliners or more than 37,000 new F-Series truck bodies a month.

The main environmental advantage of recycling scrap aluminum is that it takes one-tenth the energy required to reprocess scrap aluminum than it does to make new aluminum, according to the Aluminum Association. The organization estimates that because of how cost effective it is to recycle aluminum, 75 percent of all aluminum produced is still in use today.

At the heart of this closed-loop recycling system is a large, automated vacuum system and more than two miles of tubes crisscrossing the plants. Developed at Dearborn Stamping Plant, where F-150 – the first high-volume truck to use a high-strength military-grade aluminum-alloy body – is built, the system is now in use at Kentucky Truck, home to Super Duty, and Buffalo Stamping, which manufactures alloy panels for commercial F-Series trucks.

As doors and fenders are stamped into shape, scrap material is shredded into chips, roughly the size of a dollar bill, which get sucked into the system and routed via a series of computer-controlled gates until the journey ends seconds later in a multi-ton pile in the back of a semi. Think of it as a long water slide ride for aluminum scrap, with a splash landing at the end.

“The system automatically knows which of the four different grades of alloy is being stamped at a given time, then it routes the material into one of four trucks standing by to send it back for reprocessing,” says Conrad.

As Ford expands the use of aluminum in its product lineup, closed-loop recycling systems will be essential to the long-term viability of lightweight materials and meeting overall sustainability targets.

The use of recyclable high-strength military-grade aluminum means 2017 F-150 boasts best-in-class fuel economy among gasoline-powered trucks. For the all-new Super Duty, it means best-in-class capability – 2017 F-250, F-350 and F-450 trucks use a fully boxed, high-strength steel frame and military-grade aluminum alloy for the body. Ford reinvested much of the resulting weight savings into expanding Super Duty’s capability to include more towing and hauling capacity, along with a greater combined gross vehicle weight rating.

“Our ability to recycle leads to improved fuel economy and capability for our truck customers,” says Conrad. “And it helps us build more affordable, high-performing, efficient trucks.”