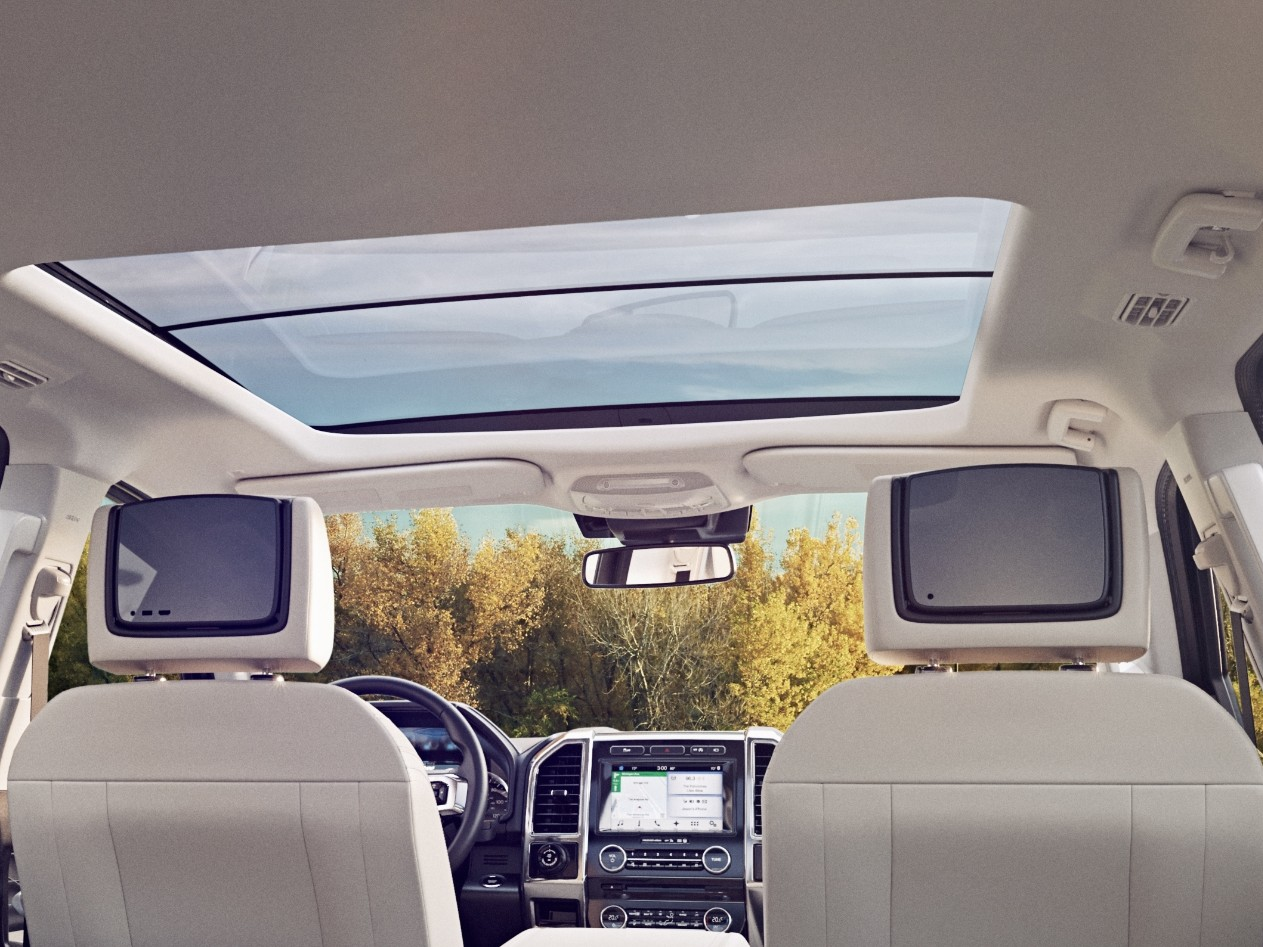 DEARBORN, Mich., Feb. 28, 2017 – Ford is reinventing the way drivers and passengers entertain themselves while on the road, offering new ways to wirelessly stream live TV and listen to music in its newest SUVs.

These new features are a result of shifting trends toward streaming services, whether for television shows, movies, music, podcasts and more. For example, one in three U.S. consumers currently listen to streaming music, according to trade association IFPI, with Generation Z and Millennials streaming at a more frequent rate.

In the all-new Expedition, available this fall, an available Wi-Fi hotspot supports as many as 10 devices at once – up to 50 feet from the vehicle – while an available dual-headrest rear seat entertainment system provides a next-generation video experience that allows passengers to watch live TV via SlingPlayer™ on either of two video screens. The system represents the first time SlingPlayer – which connects to a user’s home Slingbox™ account – is offered in an automobile.

In the all-new EcoSport, available in early 2018, as well as in the new Expedition, Ford offers stream-friendly technology including Apple CarPlay™and Android Auto™ capability, SiriusXM™ radio, an 8-inch touchscreen, and USB ports and power outlets that allow customers to connect and charge their many devices and listen to or watch content on-demand.

These media experiences are bolstered in both Expedition and EcoSport by the high-quality audio of the available Ford-exclusive B&O PLAY™ Premium Audio System.

Live TV viewing experience coming to all-new Expedition
When the 2018 Ford Expedition reaches showrooms later this year, passengers will be able to use the available dual-headrest rear seat entertainment system monitors to watch movies and video – even TV shows and live sporting events – streamed from a home cable or satellite system.*

The system, called EVO by developer VOXXHirschmann Corp., includes two 8-inch monitors integrated into the back of the front-seat headrests, a secure, in-vehicle wireless network hub that enables passengers to connect using a mobile device, and a host of sources by which to view content – including an industry-first SlingPlayer that lets them connect to a home cable or satellite system and watch live TV on the road.

“This entertainment system creates an entirely new viewing experience in the vehicle,” said Craig Patterson, Ford Expedition brand marketing manager. “It brings the smart TV experience to Expedition. Together, they completely change the dynamic of a family road trip.”

SlingPlayer is software embedded into the entertainment system that lets passengers connect to a home-based Slingbox system to watch and control the TV signal.

Passengers can use additional sources to view content, including a DVD player, HDMI, USB and SD card. Passengers can watch content from their Android®-based smartphone equipped with Miracast™ streaming. They can also stream video to the displays using the entertainment system app’s SmartStream function on compatible iOS® or Android devices.

Using a downloaded app on their smartphone or tablet, third-row passengers can connect to the network and watch non-restricted content. The system enables video playing on either headrest monitor to be viewed on up to three mobile devices simultaneously.

This connectivity isn’t limited to time in the vehicle. The wireless signal – when using the available Wi-Fi hotspot in Expedition – has a range of about 50 feet.

In addition to watching TV shows and movies, the system allows gamers to plug in to the HDMI port and play. And the USB plug doubles as a charge port – the seventh port available in the all-new Expedition – for mobile phones.

The system includes two wireless headsets, either of which can be paired with either monitor. Each monitor is equipped with a standard headphone jack for additional viewers. When everybody is watching the same program, the sound can be channeled through the vehicle’s audio system – including the available 12-speaker B&O PLAY premium system.

There are three ways to control each of the monitors:

Front-row occupants can stay in command of what is playing using the touch screen mounted on the center stack when their mobile device is connected with the entertainment system app through Ford SYNC® AppLink™. A parental block function gives them power to disable all second-row and mobile remote commands.

Music streaming the norm in all-new EcoSport
In a compact SUV like EcoSport, where drivers can go small while living big, every inch of interior real estate is precious.

With Millennials preferring streaming and subscription music services over CDs, Ford is replacing the CD player in the EcoSport with available technology that allows more on-demand choices while freeing up interior space to hold mobile devices or other personal items.

According to the 2016 Nielsen Mid-Year U.S. Music Report, overall consumption of digital music – downloaded and streamed combined – is up 15 percent. Meanwhile, physical album sales, including CDs, are down 10 percent, against a sustained surge in vinyl.

By 2021, IHS Automotive projects 46 percent of vehicles sold in North America will not have a CD player.

Instead of a CD player, EcoSport will now feature a unique horizontal storage bin over the glove box for storing smartphones within reach, while also allowing for a more upright touch screen.